ABA FORMS PARTNERSHIP WITH ANGELS & DOVES
Indianapolis, IN.  “Our mission is to put an end to bullying, violent acts, injuries and suicides in schools,” stated Kim Harvey, Co-Founder of Angels & Doves, a nationwide Anti-Bullying program headquartered in Indianapolis, IN.  “160,000 students stay home daily due to bullying.”
“And that’s the reason that the American Basketball Association (ABA) has formed a partnership with
Kim and her great organization,” added Joe Newman, ABA Co-Founder.  “Our program, Bullies are Cowards, was our first step to help combat bullying, but this program goes much farther and is making a greater impact; we are thrilled to be a part of it.”
Bullying has become a national epidemic of an unconscionable crime among 4-18 year olds.  The mission of Angels & Doves is to create a national awareness through their unique tools, which include professional speaking engagements, educational materials for all age groups, The Bull Program, The Bully Book and the No Bullying Billboard.  Representatives of Angels & Doves are available to speak
professionally to grade schools, middle schools, high schools, summer camps, detention centers, juvenile centers, churches, city parks and other youth organizations nationwide.
Angels & Doves Anti-Bully Program has been recommended by Ellen DeGeneres and bullying has been reduced by 50% in schools that have a presentation.  For more information, visit www.angelsanddoves.com.  To book a representative from Angels & Doves, contact bookings@angelsanddoves.com or call 317 870 1100.  Or visit www.americanbasketballassociation.org or www.abaliveaction.com.
–
Thanks.
Joe Newman 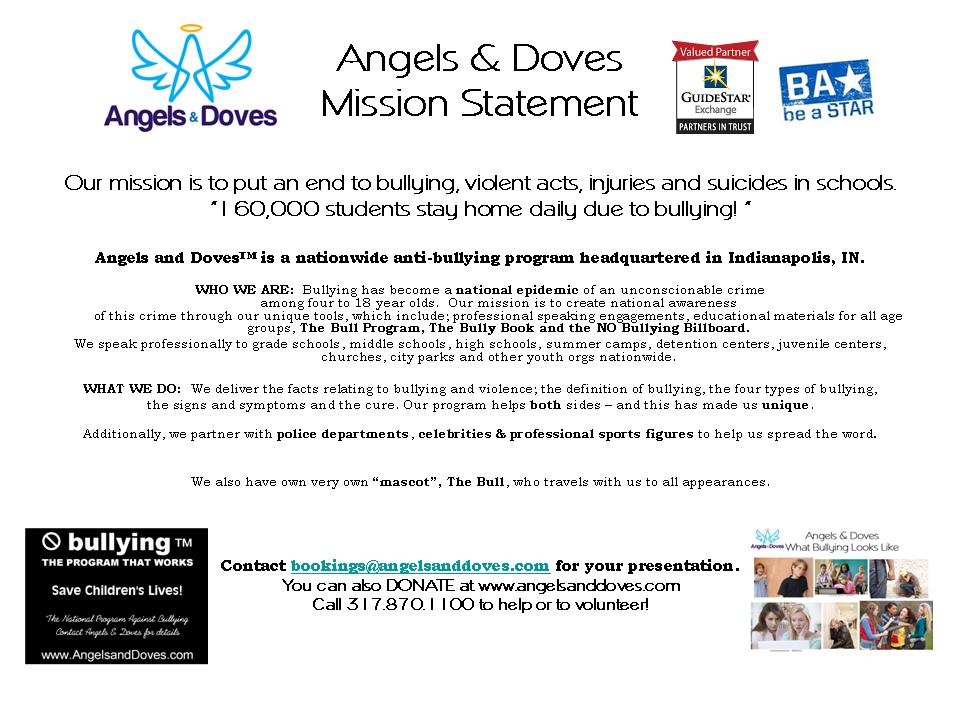