Gregory Brown always had plans for his future that centered on professional basketball. Like most teenagers with above average skills Brown dreamed of playing major college basketball and hoped to play in the NBA and provide for his family. However, fate intervened and shook the plan like an Iverson crossover. At 27 Brown resurrected his dream of pro basketball by bringing a second generation American Basketball Association franchise to Baltimore. 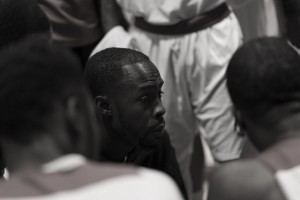 The Baltimore Hawks begin their second season in the remix version of the ABA in East Baltimore. A league that produced some of basketball’s all-time great players including: Julius Erving, and Moses Malone, gives Charm City’s undiscovered stars a chance to shine. “We have a lot of great talent in this area that’s going to waste so I figured why not put a platform here to help the guys get better contracts so they can provide for their families,” said Brown, who is also the team’s coach Brown played high school basketball at Lake Clifton Eastern High and spent one season at Anne Arundel Community College before turning pro. His exit from college was hastened by fatherhood.  While playing in Argentina another of life’s crossovers derailed him when a broken wrist wouldn’t heal properly and ended his career. He became a Verizon FiOS technician but never lost his passion for basketball. Brown focused his return to the game’s business side. Initially the prospect of pro sports ownership was daunting.

However, the confidence of his late grandmother, Velma Price, was the driving force behind his buying an ABA franchise as a posthumous investor. Brown took his grandmother’s inheritance and began raising capital to fund the team.  It took almost $26,000 of personal finances before the team could tip off.  He paid a $15,000 market reservation fee to operate the franchise and spent around $9,000 to set up his corporate infrastructure. “When I first started thinking about buying a team I had a long conversation with my grandmother,” said Brown.  She gave me the encouragement I needed by me and helped me get started”. However, the corporate support from the community has been sparse.

The Hawks major sponsor is Downtown Locker Room but that one deal will not guarantee a profit.  Brown relies heavily on barter deals to help offset the cost of meals and lodging.  He looks for companies that will buy into athletic success and community outreach. Brown’s vision for the Hawks paid immediate dividends during their inaugural season.  They sold out 92 percent of their capacity and made the ABA playoffs.  Playing at the 1,500 seat St. Francis Academy arena Baltimore averaged 900-1,000 fans per game. For 10 years (1967-1977) the ABA revolutionized pro basketball with its iconic red, white, and blue basketball and innovations such as the dunk contest and three point shot.

It merged with the NBA in 1977 which brought the Spurs, Pacers, Nuggets and Nets to the league.  Baltimore’s first ABA team -The Claws – were scheduled to play in 1975 although financial issues led to its demise before playing the regular season. This new ABA launched in 1999. The Hawks started the 2014-2015 season ranked 77th of 79 teams but finished within three games of playing for the championship.  They open ranked 6th of 100 following the league’s expansion and expect to be a national championship contender this year.  After winning an ABA championship Brown hopes the Hawks can become a franchise in National Basketball Developmental League However, the greater mission is to impact the community.  Brown hopes they will play a role in healing civic wounds and reducing crime rates.  Through relationships with Reach Partnership High along with Vanguard and Booker T. Washington Middle School Brown wants the organization to be an example for youth in the city hope when they see players who face similar challenges but still work to reach their goals. – See more at: http://www.afro.com/baltimore-hawks-take-flight/#sthash.7cGdsMqx.dpuf