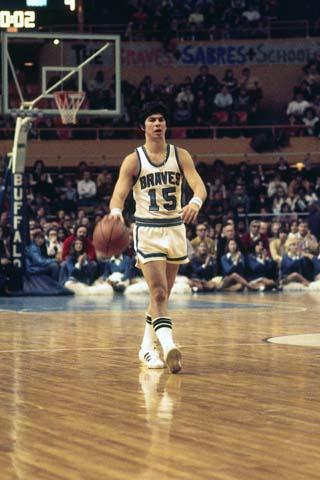 Buffalo, NY.  Life in the world of pro basketball can be cyclical.  You start your career as a player before moving on to either a front office position or coaching position.  For the lucky few that cyclical  journal leads you back to the same city where your professional basketball career got started.

Ernie DiGregorio started his professional basketball career as the 1973 first round draft pick for the Kentucky Colonels of the American Basketball Association (ABA) which he turned down so he could try his luck at being drafted into the National Basketball Association (NBA).  DiGregorio was selected in the first round, third overall, in the 1973 NBA draft, by the Buffalo Braves.  Now, DiGregorio, known as “Ernie D” during his playing days, returns to Buffalo as the Director of Operations for the Buffalo 716ers of the ABA.  DiGregorio’s cyclical journey not only returns him to Buffalo, but now gives him an opportunity to be a member of an ABA team.

DiGregorio’s flame burned brightest his first season with the Braves when he led the league in free-throw percentage and assists per game, on his way to being awarded Rookie of the Year.  DiGregorio spent four of his five NBA seasons with the Braves, before short stints with the LA Lakers and Boston Celtics.

When asked why bring DiGregorio in, 716ers owner and GM Tawan Slaughter wants to pay homage to the Braves while building a new successfl basketball culture in Buffalo.  “Our city was very blessed to

have the Braves in the 70’s, and it’s a shame they left.  We didn’t have a quality, stable basketball franchise since then.  Going into our third season, I’ve listened to our fans.  I keep hearing how they want the best players and want a championship.  I’m working hard on player acquisition now, and Ernie will help steer the organization to keep growing and keep bringing 9in fans. I’m excited, we have big things planned for this season.

DiGregorio will now oversee and manage all off-court activities for the 716ers organization as well as deliver the fans the highest qualityh fan experience on game day.  Fans will get their first opportunity to see DiGregorio courtside during the second annual “Thanksgiving Weekend Tournament” hosted by the 716ers.  Home games will be played at The Burt Flickinger Athletic Center in Buiffalo.  For more information, call 716 986 3433 or email info@buffalo716ers.net or visit www.buffalo716ers.net or